~A Little Bit of Knitting~ 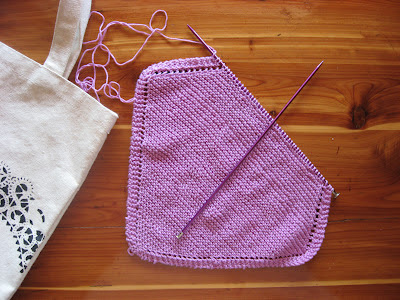 I have always liked hand knit dishcloths. Until I start using them. And then they are so thick and hard to use that I don't like them...but I always seem to be drawn to knitting them.

Awhile back I thought I should make a dishcloth with thinner yarn. So I am. I like the way it is knitting up. I'm using 100% cotton yarn from my stash, size 3 needles. I knit a bit at a time, while I sit and watch my daughter play in sand, while something Not too Riveting is on TV. Little by little and then it will be done, and I can decide if I like knitted dishcloths or if it is just the idea of knitted dishcloths which appeals to me.

The pattern is based on the popular dishcloth pattern, many sources online. I am knitting three stitches instead of two before the yarn over.
Posted by Tammy at 5:20 PM 5 comments:

~The Start of Canning Season~

Ah, canning season! I ♥ canning. It is, admittedly, labor-intensive. But it is so rewarding to step back and see all those gleaming jars full of  delicious food. Last summer, I canned many, many jars of tomatoes, salsas, green beans, jams, and applesauce. By the last apple I was ready to be done. But now I'm ready to start! It's funny how that works!

So far, from our garden produce, I have canned one pint of pickled peppers (a mix of three types of peppers) and three pints of garlic dill pickles:

We have seven cucumber plants this year, and they are really taking off. If they all continue producing well, I will be up to my ears in cucumbers!
The last time I made pickles, it was the summer of 2005. I used one recipe, and made them all in one day (I purchased my cucumbers). And then, much to my complete disappointment, they didn't turn out very tasty. Neither of us really cared for them, and only a few of the many jars were even opened. Eventually I just emptied the jars. I don't want that to happen again! So I'm going to be trying out a lot of recipes this year! I'm going to copy or print the recipes and keep them in a binder, marking the jars to correspond with the recipes. Then when we open a new pickle we can decide if the recipe is a keeper or not. It seems like a lot of extra hassle, but I think it will pay off in the end! And at least if there is a recipe or two that we don't really like, it won't be too many jars!

On Monday I went blueberry picking, and yesterday I made blueberry spread with no/low-sugar pectin. I ended up sweetening the batch with one cup of sugar, as the jam without it was on the tart side. I would have had five half-pint jars, but I bumped one of my jars as I was cleaning the top, and it spilled across the counter. That was disappointing!

We have a few tomatoes that are starting to ripen. And we've gotten a few green beans here and there. I'm going to be slammed with tomatoes and green beans later in the month and through August, so to that end I've been reading my canning book like a novel, picking out recipes to try with my (hopefully!) bumper crop!﻿
Posted by Tammy at 11:16 AM 2 comments:

Happy July! Wow, this summer is just passing by so quickly!

The highlight of June was my twelfth wedding anniversary. It seems so long ago, and yet not that long ago, that I stood at the altar and said, "I do." Twelve seems so...almost...grown up. Hehe.

Last spring, I started having trouble with my back. Other than a few visits to a chiropractor, I didn't do much to "fix" the problem. Finally, after nearly a year, I decided to address the problem properly. I got x-rays, found a new chiropractor, and after several months now - I can function without pain! I don't know why I let the pain linger so long, but my back had gotten to the point where housework and normal living would give me shooting pain in my back. I'm glad to be almost back to normal! I went strawberry picking with my daughter and was so happy that I didn't come home in agony!

I've hit another sewing streak - I'll have to post pictures. :) I'm sewing a lot now because in another month I'm going to be in the kitchen canning away!

What will I be canning? Tomatoes, green beans, pickles, to name a few things! We have a larger garden area this year, and thanks mostly to Kevin's hard work we have the following growing in our garden: tomatoes, green beans, cucumbers, four varieties of peppers, onions, watermelon, acorn squash, sweet potatoes, cauliflower, corn, sunflowers, peanuts, and popcorn! I also have some herbs growing in our small plot at home.

It's been a great year for gardening because the weather here has been so hot! We water our plants and the long, hot summer days have made awesome growing weather!

Well, that's just a little snapshot of my summer so far! I'm hoping to get better at this blogging thing. ;-) My mom told me she checks my blog every day...if I were her I would have quit checking a long time ago. =P
Posted by Tammy at 3:32 PM 3 comments: