Happy Thanksgiving, a day late, to my US readers! :-)

I hope you had a wonderful holiday with friends and family. Since we have moved to Michigan we have had pretty quiet Thanksgivings. However, this year it is *not* quiet, and I'm very grateful!!! Two of my sisters and my brother are visiting us this year, and we are enjoying their company very much! They arrived on Wednesday morning, and will be leaving Monday morning.

Any "Black Friday" shoppers out there? Everyone but me was going to get up early and go out...but everyone slept in. ;-) They just got back with all their deals, so I guess they didn't miss out on too many sales!

Have a wonderdful day!
Posted by Tammy at 9:07 AM 3 comments:

How not to roast a turkey...

The Turkey Shot out of the Oven

The turkey shot out of the oven
and rocketed into the air,
it knocked every plate off the table
and partly demolished a chair.

It ricocheted into a corner
and burst with deafening boom,
then splattered all over the kitchen,
completely obscuring the room.

It stuck to the walls and the windows,
it totally coated the floor,
there was turkey attached to the ceiling,
where there'd never been turkey before.

It blanketed every appliance,
it smeared every saucer and bowl,
there wasn't a way I could stop it,
that turkey was out of control.

I scraped and I scrubbed with displeasure,
and thought with chagrin as I mopped,
that I'd never again stuff a turkey
with popcorn that hadn't been popped.
Posted by Tammy at 9:53 AM 5 comments:

Labels: In the Kitchen

~Ottobre: a new adventure in sewing~ 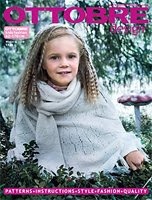 With part of my birthday money, I treated myself to a subscription to Ottobre. Ottobre is a quarterly magazine filled with trendy children's patterns. It seems expensive, but there are so many patterns in each issue, it is worth it! The magazine is published in Finland, and thankfully they have an English version! :-)

I just got my first issue in the mail this last week, and I'm really excited about some of the patterns. I think I will probably wait to start sewing until my little one is here, and I can figure out what size will work best for her. All the sizes are by centimeters, so that is a little confusing to me. I've never gotten comfortable with metric measurements, so I guess I get to jump in with both feet on this one! :-)
Posted by Tammy at 9:20 AM 7 comments:

Have you ever? I saw this several places, and thought I'd do it too! =)
Bold the things you’ve done.

1. Started your own blog

2. Slept under the stars - at camp, when I was in high school.

6. Given more than you can afford to charity

7. Been to Disneyland/world - Disneyland with Kevin

8. Climbed a mountain - if it has stairs up it does it count? :-) Morro Rock in California

13. Watched a lightning storm at sea

14. Taught yourself an art from scratch

17. Walked to the top of the Statue of Liberty

18. Grown your own vegetables

19. Seen the Mona Lisa in France

20. Slept on an overnight train

22. Hitch hiked - when our car broke down

23. Taken a sick day when you’re not ill - yes, but at the place where I worked sick days encompassed other things besides just being sick

28. Ridden in a gondola in Venice

30. Watched a sunrise or sunset

34. Visited the birthplace of your ancestors

36. Taught yourself a new language

37. Had enough money to be truly satisfied

38. Seen the Leaning Tower of Pisa in person

43. Bought a stranger a meal at a restaurant

45. Walked on a beach by moonlight

46. Been transported in an ambulance

47. Had your portrait painted

49. Seen the Sistine Chapel in person

50. Been to the top of the Eiffel Tower in Paris

54. Gone to a drive-in theater

56. Visited the Great Wall of China

57. Started a business - does my Etsy shop count?

60. Served at a soup kitchen

63. Gotten flowers for no reason

68. Flown in a helicopter

76. Seen the Changing of the Guards in London

78. Been on a speeding motorcycle

79. Seen the Grand Canyon in person

84. Had your picture in the newspaper

87. Killed and prepared an animal for eating

94. Made a baby - but can I say that God truly is the One Who is in the baby-making business!

95. Seen the Alamo in person

96. Swam in the Great Salt Lake

97. Been involved in a law suit 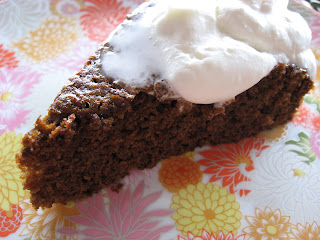 Recipe found on this recipe cheater sheet. I baked it in two round cake pans, and plan on freezing one for later. This gingerbread is so yummy! It isn't very sweet, just the right amount of sweetness, I think! I didn't have a cup of molasses, so I added 1/2 cup honey to the molasses I did have.
Posted by Tammy at 6:03 PM 4 comments:

Labels: In the Kitchen

Today I made a change...after being a loyal Bloglines.com subscriber for over three years, I switched to Google Reader. Since I have less than 30 blogs I subscribe to, it didn't take me too long to switch. I think I'm going to like it. It is different, of course, so I'll have to get used to it.

I was just fed up with Bloglines. Today I opened the feed reader and it said I had over 5000 posts to read. Ha. As if 30 bloggers had typed that many posts overnight!...and when I cleared them, they came back again. I was getting frustrated. If that were the only problem, then I would have just dealt with it. But lately I have been missing posts from certain bloggers, then all of a sudden the last two weeks worth of posts would show up. Etc., etc., etc.

I've put up with a lot of bugs over at Bloglines in the last three years, we'll see how Google Reader does!
Posted by Tammy at 4:53 PM 9 comments:

Sunday it snowed, pretty much all day long. It didn't stick until later in the day though. Monday morning, not exactly a winter wonderland, but still snowy: 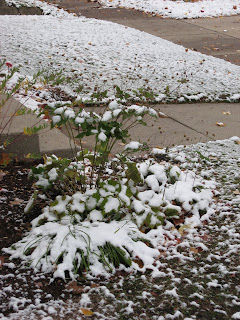 There is still some snow here and there, but most of it has melted. *Sigh* I miss warm weather already!!!
Posted by Tammy at 11:06 AM 7 comments: 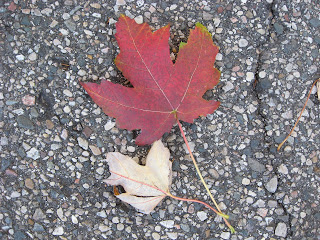 It has been a gorgeous fall so far! This week we've had weather in the low 70's! That is very unusual weather for the beginning of November, but I'll take it!!! It's hard to believe the snow will be flying soon, when it is so warm and sunny out.

I am still feeling yucky with my morning sickness, thus the lack of posting. I'm trying to figure out what I want to do with blogging once I feel better. I've enjoyed blogging over the last 3 years, and I'm not quite ready to give up on it. But I know that my blogging lacks a lot right now. I also will be one of those protective mother hen-types and won't be posting any pictures or details of our little one. I've given it a lot of thought, actually way before we were even expecting. It's hard, because I really would love to share with my dear bloggy friends, but I realize in sharing, I'm sharing with the whole www...and that scares me.

My house is torn up right now because Kevin is completely redoing what was my sewing room. It will be the nursery. I'm terribly excited about how it is turning out! When it is finished (in a few weeks) I will share pictures of the whole process. :-)

I celebrated my birthday last Sunday. It was my most unbirthdayish birthday ever. LOL We actually celebrated on Monday, since Sunday was so busy. =) With the state of the economy, some restaurants are having special deals at the beginning of the week - we went to a steak house and got two meals for $13. Of course, you have to select off a special menu, but I thought it was worth it to go on Monday instead of over the weekend. I had steak, Kevin had chicken. We both got two sides and we left very satisfied. My steak was 6 oz, and I only ate half of it, so Kevin had steak and eggs for breakfast the next day. :-) The meals weren't skimpy at all (unless of course you want a larger steak!), plus it felt great to walk out of a nice restaurant and have spent less than $20! So anyhow, I thought I'd throw that out there...you can check around and see if restaurants in your area are offering deals like that - there are several that do this in our area. It makes business sense for the restaurant: the place was packed for a Monday night and people were waiting in the lobby for seats.

Lastly, I wanted to share some Etsy shops with you. :-)
Susan is selling handmade cards. They all look so pretty!
Her daughter Beth is selling jewelry. I've purchased two sets of earrings for birthday gifts for my sisters.
Heather has restocked her shop with colorful box bags. I can think of so many uses for these!