I'm not even going to comment on the number of weeks left in which to finish 52 projects. Except I just did. 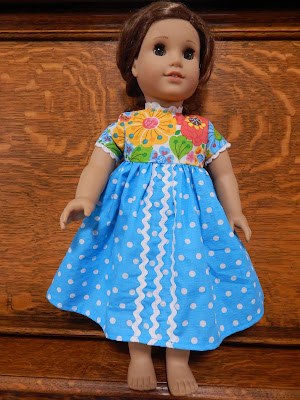 This morning I decided to do some sewing, just for fun. I have been wanting to sew but there have been so many things hanging over my head that I just haven't made time for it. The house was reasonably clean(ish) and so I pulled out a pattern and got busy.

Soon my daughter noticed I was sewing and asked to look at my patterns. In the time I sewed, she drew 10 dresses that she wants me to make for her. While I will probably not make ten dresses for her any time soon, I have to say it was a happy span of time, as I sat sewing and my daughter sat chatting nearby.

I had everything I needed (pattern, fabric, notions), so this was completely free. I had enough for the skirt if I cut it in two pieces rather than on the fold, so I used ric rac to cover up the seam going down the middle. The dress fits pretty well, but it is a little tight at the neck.

This doll is Rebecca from American Girl. She was a gift to my daughter for her birthday but she hasn't been playing with her until recently. I figured since she was playing with her she could use some more clothes. When she first got her I was looking for patterns that were in the same era as Rebecca but then I realized my daughter doesn't care about that!