My sister (#7 in the lineup) just had her first baby - a little girl. I'm so happy for her and her husband!

When we moved to South Carolina, we were in a little apartment and we only had one car since we'd sold Kevin's truck. I was bored, so I decided to pick up some yarn and make my sister a baby afghan. 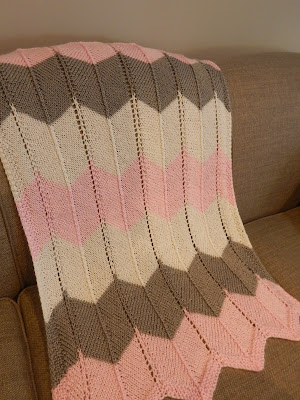 I decided on machine-washable yarn, because new moms don't need to be worried about hand washing wool blankets! I also added a garter border on all sides so that the edges would not curl. 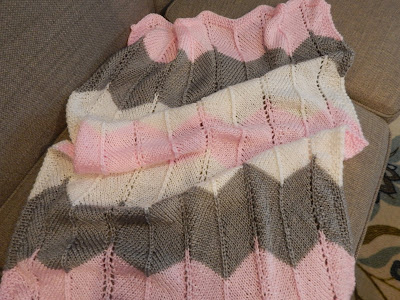 This was a free pattern (found here...scroll down) and it was very easy to follow. Link to my Ravelry project here, for yarn and pattern details.

I enjoyed making this so much that I offered to make one for another sister who is also expecting baby #1 (also a girl).
Posted by Tammy at 8:23 AM 2 comments:

This unpacking and settling in feels like it is taking forever. And then I remember that we moved into our house the first weekend of August, so really it has only been three months now. And to top it off, we've been homeschooling that entire time. School takes up a large portion of my day! And then of course there is laundry, cooking, dishes, and all that.

The living room and dining room have actually been in this state for at least a month or so, with the exception of a few boxes containing canning supplies that were on the floor in the dining room. Finally, last Saturday, I packed those up and Kevin hauled them up to the attic for me. So now the main part of our house has no boxes! There are boxes in the office and a few unpacked things that have no home in our room.

For the living room, I want to buy or make some larger pieces for over the couch and television. We don't have anything suitable for either space. The mirror over the fireplace was an awesome deal we found on Craigslist. The picture doesn't show them very well, but the vases and twiggy things came from IKEA. We also purchased the white curtains at IKEA. They were a great deal! Thick curtains for $30 a set? And they are nice and long too, which is what our tall windows needed. 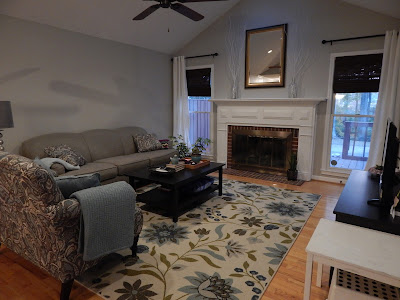 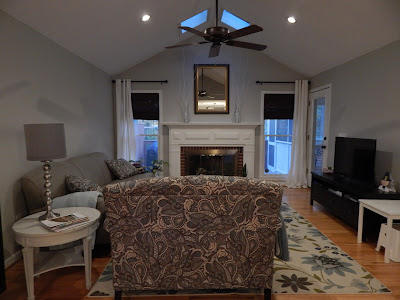 Eventually, we plan on replacing the light fixture in the dining room. It is centered in the area designated for a dining room, but if we center our table underneath the light, the door to the kitchen swings into the table. I would like the lower lighting, but if we had a light right up on the ceiling that would work too (then it doesn't matter if it is centered or not). 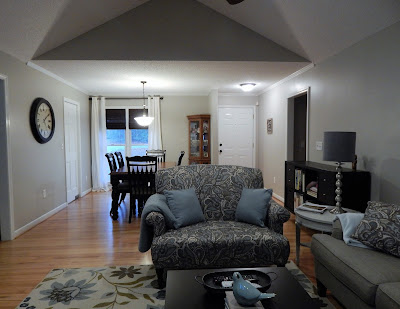 I love the way the living room is set up! So nice for smaller groups. We'll test out a bigger group on Thanksgiving! :D 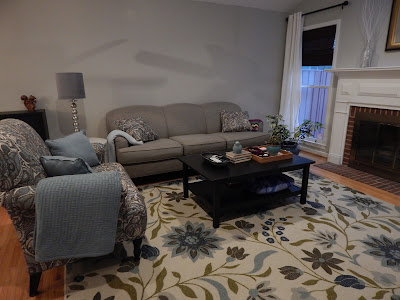