On Friday through Sunday, Kevin and I went on an anniversary excursion to Mackinaw City and Mackinac Island. We've lived in Michigan for three years and didn't know until our visit that both the city and the island are pronounced the same...just spelled differently. (It's pronounced with an "aw" at the end).

Keeping in mind Randi's "Get Real Monday", I took some extra pictures of our vacation for this post! I have a few more pictures I want to share, but I'll post those in another post.

See:
One thing we saw was the fort at Mackinac Island-- 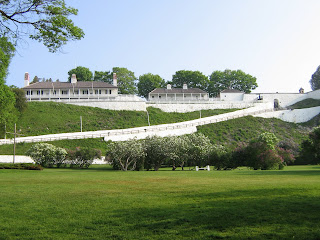 Hear:
The clip-clopping of the horses on the island. No automobiles are allowed on the island, which makes for a lot of walking or bike pedaling! Horses and bikes are the only mode of transportation throughout the island. We rented a horse and carriage for two hours. It was so much fun, and a very relaxing way to see a large portion of the island. These hooves belong to Beth, our horse who behaved quite well, considering the fact that she has tourists directing her about all season long! 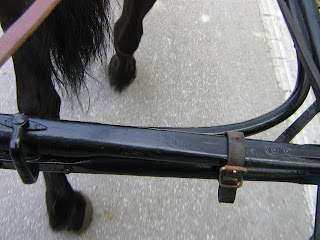 Smell:
Lilacs! The island's Lilac Festival is next weekend, but the lilacs were in full bloom, and it was just heavenly to walk under the tall tree-like bushes! 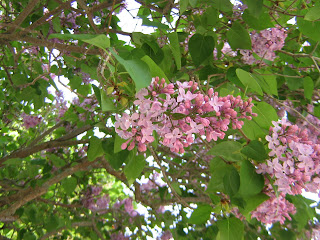 Taste:
A pastie...I had never heard of them till we went north. It was fun to try one! (They are a U.P. specialty--pastry wrapped around meat, potatoes, and vegetables, and served with gravy). 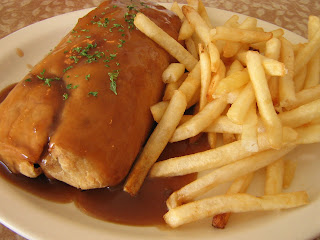 Feel:
The sand and water beneath my feet! 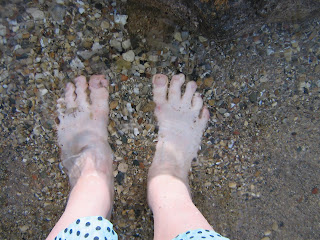 We had such a wonderful, wonderful time! It was just so relaxing! We got to Mackinaw City on Friday afternoon, and went to the island on Saturday. We had planned to spend much more time on the island than we did, but we were exhausted by 3 p.m.! Today we went to church in the morning, and afterwards viewed a few more things, and then headed home. It rained all afternoon. We were very thankful for the wonderful weather we had while we were on the island on Saturday!
Posted by Tammy at 10:17 PM

Oooh, I love lilacs. Looks like you had a beautiful time.

I think it is neat that horses are the only mode of transport on the island. Your getaway sounds like a nice one!

I love the island and the town. Did you go to the fort in the town. They have people dressed up and doing things from old times. A wedding in the chapel and one woman made the best looking fruit cobbler in a pot in the fire place. The restaurant across the street has a good buffet. I enjoyed the pickled chicken gissards(sp). The waitress couldn't believe I liked them.

I'm glad you had a wonderful time!

I remember reading about another trip you took to Chicago and saw the Sears tower; I can't remember if was for an anniversary or not but it sounds like you have a tradition of a nice trip on each anniversary. What a terric tradition to have!

I've lived in Michigan all my life and did even realize that the island and city were actually spelled differntly:) It is a pretty neat place to visit; I've been twice.

Beautiful! Lilacs are the greatest aren't they?

I've been telling The Man that we need to get a horse and buggy. With the price of gasoline, I think it would be very practical!

It looks as if you had a beautiful and relaxing trip. Congrats and Happy Anniversary to you and your hubby!

Looks like you had a beuatufl time. Thanks for sharing your five senses. I love the smell of lilacs. Char

Loved the pictures! It looks like you had a lovely time. I'm the worst, we just returned from a trip and I only took two pictures. ^^rolls eyes^^

Love the image of your toes in the sand! The beach is one of my favorite spots! Those lilacs are gorgeous too!
:)

It looks like you had a wonderful time. The lilacs are so pretty!
The fort at Mackinac Island looks really interesting.

Great post! I think I liked the horse photo the best, but the lilacs were gorgeous too!

Tammy, it looks like you had a wonderful visit rambling around the island. It sounds very quaint; and it's so romantic that you and hubby take a get-a-way for your anniversary! :o)

HAPPY ANNIVERSARY!!!!!!!!! What a fabulous way to celebrate 7 glorious years- a memorable trip!! Thank you for showing us all the beautiful photos!

Love the feet in the water shot!

That sounds like a wonderful trip and your five senses covered it well. I'd love to smell those lilacs.

Congrats on you seventh anniversary!! It looks like you guys had a great time. :)

All the pictures were awesome Tammy!! Happy Anniversary, my friend:)))

hey.. looks like you two had a great time exploring the island! It sounds like a really beautiful place.. it makes me wanna go there... except that it's about a week long drive to get there! I love pasties...around here they call them cornish pasties for some reason...must be the origin...
What does the U.P. mean?

I'm so glad you had a wonderful time!! I LOVE the green grass in the pics, so lucious looking!

I've never had a pastie before either, never knew about them.....LOL~

I've always wanted to try one of those pasties.
I saw an episode of passport to europe on the travel channel and apparantly they are originally from cornwall and not served with gravy... They will bake in meat and potatoes and in a little section on the end, they will fill it with jam as a desert. Kinda like the original hot pocket.

oh, and the ones they make in Corwall u.k. look like giant gyoza.