Since so many of you expressed interest in projects I will be doing for our coming baby, I thought I would share the few that I've worked on so far.

This is still a WIP, but should be finished in a week or so: a cabled afghan, pattern by Debbie Bliss, from the book Simply Baby. The yarn is 50% cotton, 50% microfiber. It is working up so nicely, and when I'm not working on it, one of my bear friends is. ;-) 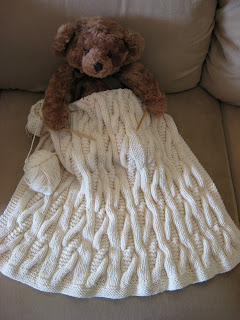 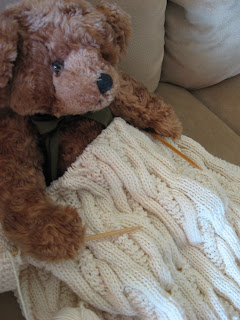 I just finished crocheting around the edge of a receiving blanket, and made a matching burp cloth. The pattern I used is modified slightly from the tutorial found over at Sew Chic. For crocheters: instead of slip stitching all the way around (I almost hate to slip stitch!), I did single crochets instead. I did use a slip stitch for the picot. 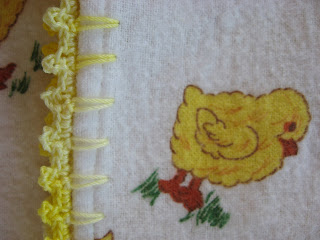 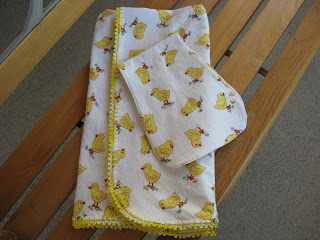 The burp cloth was my own "pattern", fashioned slightly after this tutorial. I didn't like the raggy edges, so I sewed and turned it, and topstitched around. Also, I didn't put batting in between the two layers of flannel. I've seen these around, in stores, and on blogs, and thought they looked really nice, because they wouldn't bunch up on your shoulder.
Posted by Tammy at 3:19 PM

Oh, the things are so cute!

I love the baby blanket you chose to knit! We have that DB book at the shop where I work. Sometimes (frequently) I just have to pick it up to look at the lovely patterns yet again - especially the blanket. I even had a customer who wanted to learn to knit specifically so she could make that cabled baby blanket.

Oooooooh! Love that blanket. I knit a similar pattern for some friends! Here are pics of mine:
http://faraboverubies31.blogspot.com/2006/08/lullaby-cabled-baby-blanket.html
I enjoy your blog!
April
(faraboverubies)

Hi Tammy! CONGATUALATIONS to the both of you with your pregnancy!! I did not read your blog for a few weeks (the children had holliday and needet attention), and suddenly I found out that you are expecting a child! That is so wonderful, you are surely blessed.. And, as we have four children ourselfs, I can assure you that those morning sickness (that stroke me 24 hrs..) will leave you soon. That's good news he? I wish you all the best. If you need any advice or so, just connect to me via my blog. I don't know you personaly of cource, live on the other side of the earth, but beiing a mom is universal. My sis is expecting her second child beginning of march, so you are on the same track... I loved being pregnant and soon you will enjoy it too after that morning sickness leaves you. The baby-projects look so great! He/she will be spoiled with beautyfull things..the lucky guy, haha!

Congratulations to you and your husband, Tammy! Such exciting news and I love the new baby things you've been making!
~Kelli

Between you and the teddy bear, the cabled blanket will be complete in no time! It's beautiful!

The receiving blanket looks great, too! I'm so excited for your new baby and the fun you'll have preparing!

I just did a search for the Panda Soy yarn---I think I *need* some Fudge Brownie or Hazelnut socks!

Oh, how beautiful! I've never seen a baby blanket with a cable design...it's adorable! You are a clever lady!

Love the afghan and the receiving blanket. What a pampered baby this one will be! :0)

Have a great Lord's Day!

I love the work you and bear are doing on the blanket. Beautiful pattern! The receiving blanket is adorable; and I'm a firm believer that one cannot have too many burp cloths! :o)

Hope you are beginning to feel better. (But don't despair if you're not; every pregnancy is a little different.) It is a special time; savor the best moments and nap through the queasy ones. ;o)