When Kevin and I were opening our wedding presents, we came to a box with no card, which contained a large cast iron skillet filled with unshelled pecans. I took one look at that huge skillet, and thought I would never use such a ginormous skillet. So I gave it to my parents to use. I never did find out who gave that to me! 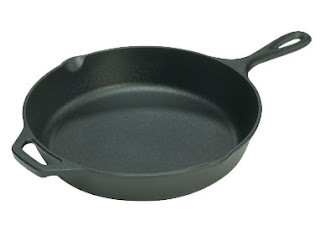 In the past year, I've been exploring healthy living a little more, and I have come to the conclusion that Teflon probably isn't the healthiest to cook with. Now, I know there are studies citing that if you heat Teflon to 500 degrees the fumes from it will kill pet birds. That's nice and all but 1) I'm not a bird and 2) a draft of air can kill a pet bird too. So that wasn't enough to convince me but still, I know that there are other pans much better and safer than Teflon. 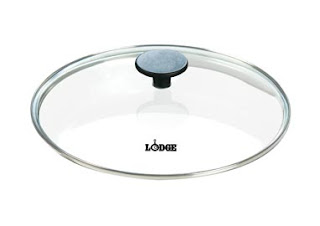 So I turned to cast iron. And guess what? I bought the exact same skillet that I had given to my parents ten years ago. Kevin thought I should ask for the pan back, since it was ours to start with (LOL) but I thought that would be a little on the rude side (Indian giver, much?). So I bought a new one for less than $20, and also a glass lid to go with it.

I'm still getting the hang with cooking on cast iron. Sometimes I forget and put tomato sauce in it, then I have to start the seasoning process all over again. But otherwise, it's been great for cooking in! It's very versatile. I can use it on the stove top or in the oven. It's a great size too!

Images are from Lodge's site and depict the items I bought and am very pleased with. :-)
Posted by Tammy at 5:04 PM

I enjoy my Teflon (seeing as how I don't have any pet birds) but have been interested in cast iron in the past few months. I have a friend who goes to Second Hand stores and buys already seasoned cast iron cookware. A little gross sounding I know, but it saves time :-) I'll be interested to hear more about how you like it!

Actually, not gross at all. I bought a small frying pan at a yard sale and use it every morning for my eggs. It wasn't very well seasoned when I bought it, but I fry my eggs in olive oil and it is beautifully seasoned now. :)

If I were more interested in going to yard sales I would look for cast iron pans, skillets, etc. while I was out.

Did I mention to you that I got a cast iron skillet from hubby for Christmas? I'm just learning how to use it... if you get good ideas of what to cook in it, I am totally up for ideas & inspiration! :)

Hi! I found you from Randi's blog.

I found this "ironic" because I have recently gone back to My Grandma's Iron skillet for the exact reasons you listed.
I'm really loving mine too. I feel so much better knowing I am not eating teflon!

Melissa, anything and everything. Just try to avoid acidic foods and you should be good to go! But you're an excellent cook so I'm sure you won't have trouble coming up with ideas for your skillet!

Laura, thank you for visiting! That's great that you have your grandma's skillet to use! I love that they are so long lasting!

I love my cast iron skillet.
Every time I cook in I am reminded of my granny and moma cooking with them and the love created with it.