Last night I had the privilege of attending a baby shower for a lady in our church. Since she is having a BOY I decided to make some gowns from the daddy's t-shirts. Thankfully he was willing to part with some of his t-shirts (unbeknownst to mommy!) and I came up with these three gowns: 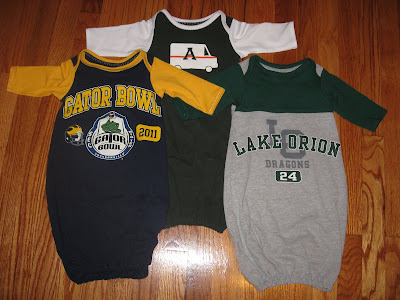 It was a lot of fun to sew them! The one on the right was proving difficult for me to figure out how to cut, because no matter how I laid the pattern on the t-shirt, some of the design was going to end up in the seam allowance! Then I came up with the idea to use the contrasting t-shirt on the top of the gown and I was able to keep the whole design on the gown. 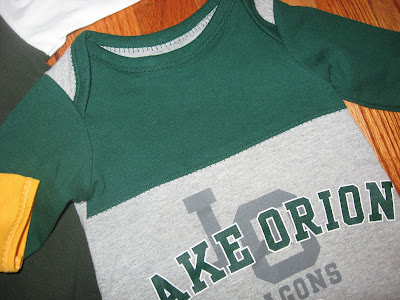 I told Kevin that I've really been surprised (for my sister and now my friend) that the guys are willing to part with their t-shirts. Kevin said, "yeah, there's a real bond with your t-shirts." I laughed, but it is oh-so-true! Guys do have some sort of bond with their t-shirts that a gal just can't understand!

This time, I used a pattern for the gowns (rather than the free pattern/tutorial which I used last time). I think I like the cut better on these than for the free pattern, so if I make them again I'll stick with the pattern. I used McCall's pattern M6103, in size small (13-15 pounds). I hope I chose the right size - I didn't want to make the newborn size and have them fit for 2 minutes. :)
Posted by Tammy at 9:04 AM

Such a great idea. Bonding daddy and baby.

Thanks so much Tammy, these are amazing and I am so grateful for your talents! I will make sure Liam gets several photo shoots in these amazing little gowns!

Love it!! Those are so cute!

It's funny about guys and their shirts. I have been known to sneakily clean out Mark's drawer. I don't think he even missed them until he saw the stash in the top of my closet! (I don't like to throw them away - I use them for paint shirts for Sunday School and I've been saving some for the knit!) :)

So cute! I was going to ask how the mom liked them, but it appears she is the commentor up above and that she liked them a lot! ;)

Charity, you're braver than I am! I'd never get rid of any of Kevin's shirts without his express approval! :D

They look cute! Wish I could have come to the shower, but the girls' Christmas program for school was that night.