Make Do and Mend

My sewing machine has been inaccessible, but on Saturday I pulled everything away from it and piled it in the hallway. And I've been sewing! (Next I need to deal with that lovely little pile of stuff that I don't quite know what to do with!)

Yesterday, I took care of a pile of mending. First up was a stuffed Hello Kitty that had a split seam in the head. After that, I turned some raggy towels and the bottom of a t-shirt into some rags. Since I don't use paper towels, it is handy to have extra rags around. 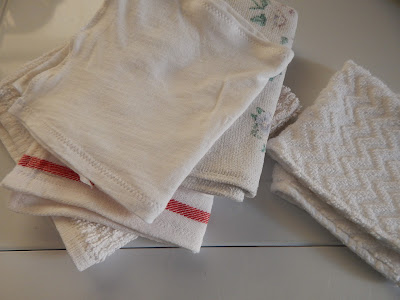 I don't know why, but it is so satisfying to me to turn towels into rags. I don't like to just move them into the rag bin without doing something to them, because I don't want to clean toilets with a rag one week and then have it accidentally get back into rotation as a kitchen towel. So most of those I folded in half and stitched shut in some form.

I also fixed the hem on two washcloths, an easy fix which will prolong their use as washcloths.

My last fix of the evening was a pair of knit pants that my daughter has. These were hand-me-downs and came with a hole in the knee. She liked wearing them though, and the hole got bigger. I attempted to just zig-zag the hole shut, but it didn't work out. So I pulled out a stained t-shirt I had set aside and used the fabric to stitch a heart over the hole. When I showed my daughter she said, "ooooh", so I think she likes them. These are strictly for playing in - not running about town or anything - but this little fix will extend their use. I've always felt like it is nice to have pre-worn play clothes. Why buy new clothes to play outside in and get all stained up? Not that I want my daughter to wear rags! But she's always played hard outside so there's no sense in wearing designer clothes in the mud! 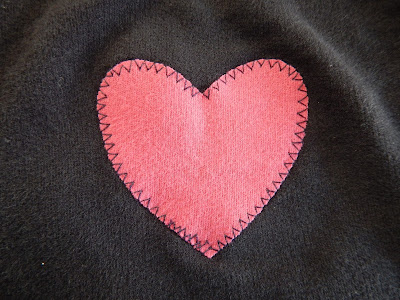