When my sister Holly was visiting me, we prepared an authentic Asian Indian dinner. We had fun making it, and it was very good! Some of the dishes came out a little differently then we were expecting, but all was edible! LOL When Holly and I were teenagers, we had next door neighbors who had come from India. They would bring food over for us to sample, and once we were invited over for the teenage daughter’s birthday, and were served a complete meal.

We both cook the same: messy. So combine two messy cooks and the kitchen was a sight to behold after dinner!

I found my recipes online here. The spices were probably the most expensive part of the meal, because I had to buy almost every spice. However, I did it as inexpensively as possible, and most were right around a dollar per spice packet.

We started the meal with soup, called rasam. It calls for curry leaves, as did another of the recipes we made. If I were to make either recipe again, I would leave out the curry leaves. Not only did it necessitate a special trip to a store which sells Asian foods, I didn’t care for the flavor (especially the next day for leftovers). 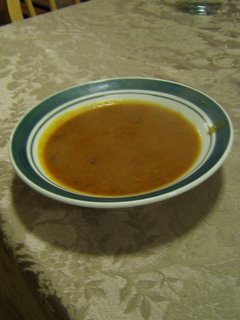 Then we had bhatura, a flat bread, and chana masala, a spicy sauce that had garbanzo beans in it. Very yummy, much like we remembered our next door neighbors making. 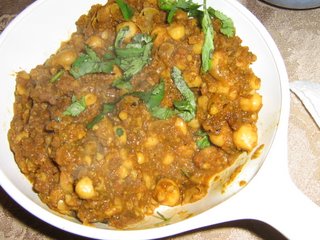 Then on to the main course: carrot rice and chicken do pyaza. The carrot rice was fantastic! I would make this again (leaving out the curry leaves). The chicken was good, not exactly what we were expecting, but still good. 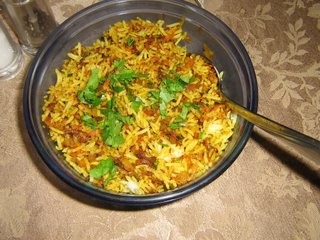 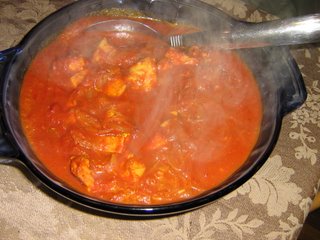 We were too full to eat dessert, rice pudding.

And we never made tea! That was the part I was looking forward to the most, but by the time we finished dinner, it was too late to start brewing black tea. This tea is just like our neighbors used to make! I made it a few weeks ago to test out the recipe. All it has in it is tea (black), sugar (the more the merrier! LOL), milk, and cardamom seeds (ground). Mmmm…mmmm!

We started cooking around 6 p.m., and didn’t serve dinner until 9:30! We laughingly said it was for sure an authentic Indian meal, because they always eat so late!

Tammy, I've never eaten Indian food! I'm wondering if I would like it. All your dishes seemed to look delish! Sounds like you and your sister had a very fun time together.

How fun! It looks so pretty and colorful. (o:

Deb, do you like spicy foods? If at all possible, see if there is an Asian Indian restaurant around...with a buffet! The buffet restaurant is the best kind for trying new foods. I don't know that there would be one in your area, but it's worth the shot, that is, if you're really wanting to try Indian food! =)

Well, I just typed out a comment...and the computer froze up on me! ...then I lost my comment! I just wanted to say I have stopped by here a few times before via Jamie's blog, but today I got to look around quite a bit. I enjoyed your beautiful handiwork and projects! Mind if I link your site? God Bless!-Heather

Tammy, what a great idea!

I've had Indian food once--Andrea Aiken and I went to Victoria, BC for 3 days (she won a trip from her work Christmas party) - we decided to try something different.

We "tasted" everything - but left feeling like we hadn't really eaten a meal. The only thing we really liked was the naan. And I got a yellow curry stain on my favorite shirt. :p

We liked the tapas restaurant much better at lunch the next day.

Hi Heather! Thanks for your comment! You are welcome to link to me! I stopped by your blog tonight, but for some reason, I couldn't leave a comment. Weird. Anyhow, nice to have you visiting! :-)

Anne, you have to do more than "taste" to get full. =D