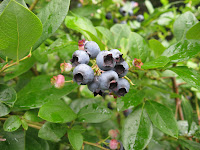 I have not canned one single thing this summer. No jam, no peaches, no nothing. I think it is more challenging to have a toddler than a baby, at least when it comes to spending a lot of time in the kitchen!

But today we went and picked blueberries. Eighteen pounds, to be exact. My goal was ten pounds, and the owner told us that a bucket full was 7 pounds, and up to a certain line was 5 pounds. So away we went, we picked for probably 2 hours or more. And we picked 18 pounds. I think the line thing was a trick to get us to pick more. ;-) Well, at any rate I have blueberries to freeze and put up! I'm really excited! Oh, and they were $1/pound and they are organic too!

Our daughter helped pick blueberries for a while, then she settled herself in front of the bucket and ate her fill, and then once she was full she started tossing them out of the bucket. After a while of wandering up and down the row between us, her fun meter hit "0" so we went and got her Cheerios and sippy cup. Sitting in her stroller eating O's and drinking water revived her spirits and brought the fun meter back up. :-)

It was sprinkling for the last half hour or so that we were there, which was actually pleasant. I'm so glad we went blueberry picking! It was a great family outing!
Posted by Tammy at 2:40 PM

it's so nice to have frozen berried to pull out of the freezer in the middle of the winter! My husband bought a lot of blueberries to freeze, so now my poor little freezer is completely full - no room for freezing everyday stuff like meat, etc... Good for you for going berry picking, we've always done it - until the baby that is... :) We're waiting until he's a little older so that he can enjoy picking with us!

Wow that's a great price for blueberries! Have fun eating them all. lol

i have been really slow with canning this summer too. this week raspberry jam is on the list. :)

Blueberry festival in Paridise (in the U.P.) I've been told they have a bumper crop this year. It's this weekend I think. I would love to go but don't have time. :(