I read Jane Austen's book Pride and Prejudice when I was a teenager, and thouroughly enjoyed it.

Since then, I have watched these adaptations of it: 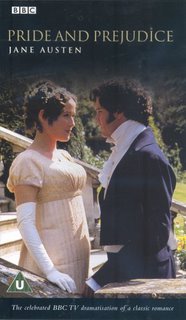 This last one was just a cheap-production modern-day chick flick...my sisters all thought it terribly funny and enjoyable, but I didn't get quite as much amusement out of it as they did.

A few days ago, my sister Holly told me that the 2005 version was out on dvd. So last night I set out to rent it. I went to two video rental stores, with no luck. It seems as though everyone else wanted to rent it too! I called another store, rather than wasting a trip out there, and they didn't have it in stock either. So Kevin and I went to Meijer and we bought it, with the plan to sell it on e-bay.

So last night I watched this version:

I have to say that of all the versions I have seen, the 1995 version (second picture down) is my favorite! That's not to say that I didn't enjoy last night's viewing. This movie was not quite as long as the others, so they didn't have as much time to develop the characters. I do believe they stayed true to the book though. All in all, it was an enjoyable movie!
Posted by Tammy at 2:03 PM

The 95 version is also my favorite. We also watched the 05 version of P and P last night. We weren't all too impressed with it. I felt that the characters were not fully developed and relationship were not fully expounded upon. For instance, it was not made clear that there was somewhat of a romantic relationship between Mr. Wickham and Elizabeth. And there were other things. If you look closely, you will notice that the girl who played Elizabeth, Kira Knightly, has VERY short hair and is wearing a hair piece or extentions. You can see her hairline in the back in a few of the scenes. The one thing that I really liked about this version is that the Father's character is more developed. All in all-we felt breathless at the end, feeling as if we had rushed through WAY too many scenes and happenings in too short of an amount of time. Speaking of the end, the very ending was weird to put it lightly!:-)

There's yet another version: Bride and Prejudice, a musical that will put you in stitches. One does need to know the real story to appreciate the attempts at these other versions.

I love the A&E version (not pictured), but have also seen the top one you showed. I'll have to see the 95 version you mentioned!

Have you seen WIves and Daughters? That is another of my favorites.

Dell, the second one from the top is the BBC/A&E version--they are the same thing (the one starring Colin Firth or however his name is spelled). There have been several different covers made for the movie.

And yes, I've seen Wives and Daughters. I had to watch it by piecemail and wait for my library to get each video in, but it was a very good movie to watch!

One of my faves! I also like the movie Emma. Have you seen that one?