~A Trip Down Memory Lane~

I thought I would share with you pictures of the kitchens I have had. Since Kevin and have been married, we have lived in three apartments and two houses.

Our first apartment was tiny all the way around, unless you considered the walk in closet, which was about the size of the kitchen! Well, not really...but it was huge compared to the rest of the apartment!

This picture was taken shortly after we moved in: 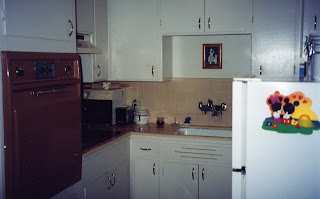 And here I am after we had been married a little while. Notice the counter tops? That is all the counter space I had. But I loved my dear little kitchen very much! 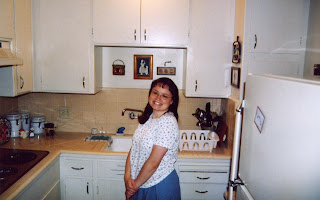 Our next apartment was about 100 square feet larger, which felt like a mansion, compared to the previous 500 square foot apartment! *Smiles* It was a galley style kitchen. I've shown two pictures so you can get the overall feel for it: 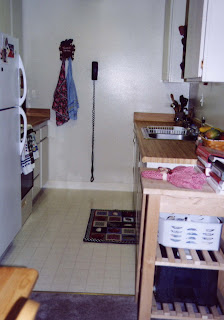 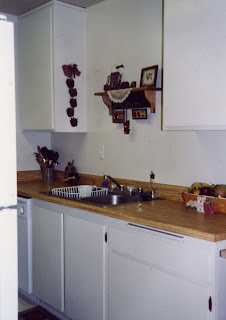 Our next apartment was even bigger. This apartment also had a galley style kitchen, and was a nice sized kitchen. 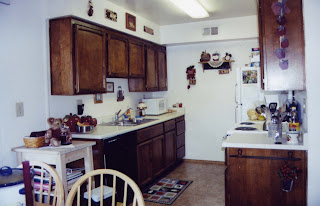 My fourth kitchen, in the first house we lived in: 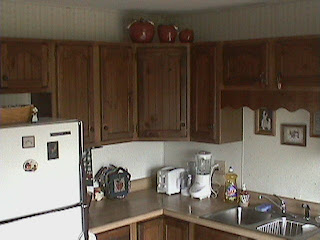 The kitchen was L-shaped, and an eat-in kitchen. 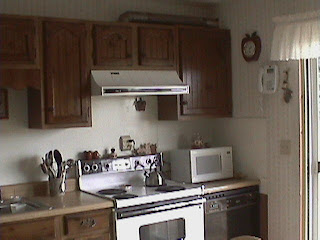 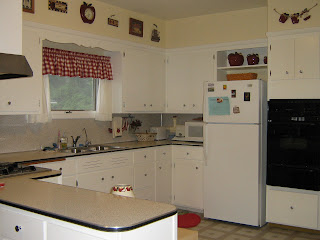 I've never had a "glamorous" kitchen, but I've always usually enjoyed the time spent in my kitchen! The kitchen is the heart of the home!!!
Posted by Tammy at 10:23 PM

How fun to look at your pictures! I think it's really neat that you have pictures of all your kitchens...I wish I did. Your current kitchen is decorated so cute. : )

Tammy, what a neat memory. I, too, wish I had thought to take pictures of each of my kitchens. The one I have now is definitely my favorite. I like your white cabinets and brightness of your current one.

I'm not sure I would want to remember some of my kitchens... The one we have now is definitely my favorite, though! It is open to the family room so now I don't miss anything!

How fun! I love your spacious kitchen!

Tammy,
What a FUN post. I love the quirky smile you have in the first kitchen. You look so proud and happy. I am sure you made many delicious meals in your kitchens.

My fondest memory of the kitchens I have had through the years (before marriage) when my family was in the Air Force was that the very first thing my mother did the day after we moved in was bake homemade cinnamon rolls. It was such a joy to wake up to that smell, it made it feel like home.

Tammy, I love your kitchen parade! How neat to see them all lined up like that! And you are just too cute for words in that first kitchen; you've got newlywed busting out all over in that picture! ;o)

Tammy,
This was such a fun post--I loved all the pictures--the one with you in it was precious--you looked so proud:) Also, each kitchen got bigger and bigger---My first kitchen was probably the size of my bathroom, but I loved it all the same, because it was mine:)

Tammy I really enjoyed viewing all of your kitchens. How fun.